For Cigar enthusiasts, this might have happened to you before, or if it hasn’t, then you are in luck. Imagine trying to relax after a hard day at the office, a cigar in one hand and a glass of your favorite wine in another. Nothing can beat this feeling; you mumble to yourself as you prepare to enjoy your stogie. However, when you open your humidor, what greets you is something completely shocking. Powder on your cigar!

One thing about both conditions is they are indications of two different things in your cigar life. Both conditions have different effects, but you need to know what the issue is before making adjustments. Hence, this article will expose you to the techniques of differentiating cigar plume or mold and other intricacies for cigar enthusiasts.

There is a constant mix-up in both conditions because they are highly similar, more or less like twins that always need to tell people who they are for clarity. Fortunately, you will learn how to tell their difference in this article.

Before we look at their differences, let’s examine what they are.

What is Cigar Plume?

Twins can never get mixed up in their home, no matter how identical they may be. This is the same way after reading this article; you will be able to tell whether it is cigar plume or mold.

Cigar plume occurs due to natural oils and sugar rising to the surface or the cigar’s wrapper. Consequently, this process allows for crystallization, and some have recorded that it makes the cigar richer.

What is Cigar Mold?

We all have heard of molds and imagine nasty elements growing in certain areas. Cigar mold occurs when there are warm temperatures, excessive moisture, and poor air in the humidor. If there isn’t enough ventilation in the area where the cigars are, there will most likely be a reaction that causes the white substance you see.

How to Tell The Difference? 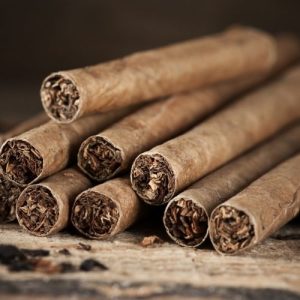 Many people have a hard time recognizing which condition the cigar is in when they find these substances on them.

Both cigar plumes and mold have the same color, although you will see in some blogs or articles that the mold is green in color.

Both have the same color, but Molds grow from within while the Plume is on the cigar’s surface.

Another way to differentiate them is that the mold will appear at the cigar’s foot while the Plume appears on the surface, close to the wrapper or the mouth of the cigar.

Furthermore, the Plume will cover most of the outside of the cigar, but it is fine. On the other hand, the mold will appear in patches

It is also said that Cigar plumes can be easily wiped off while the molds cannot be wiped off since they grow from within.

Can You Wipe The Mold Off a Cigar?

Unfortunately, you cannot wipe a cigar mold off since it has been established to grow from inside the cigar. Hence, the best way to get rid of the cigar with a mold is to remove it from the humidor.

You do not want it contaminating the other cigars in your collection. Many people lose a lot of money to this; hence getting rid of the bad egg is a great way of cutting off the mold issue.

Also, you need to inspect the other cigars to ensure that they are not affected.

However, the cigars with plume can be wiped off since it is more or less like powder.

Is it Okay to Smoke a Cigar With Mold?

Please do not smoke a cigar once you have identified a mold growing in it. You can prevent molds from appearing by keeping your cigars away from the windows. That might sound counterintuitive when the cigars need air to let out any staleness in the ambiance, but too much of that makes the cigar susceptible to mold.

Also, you need to rotate the cigars from time to time. Checking your cigars is a great way of preventing cigar molds.

You should always open the window and allow fresh air to come in. Plus, subscribing to a humidification system will help to eliminate threats of molds on your cigar.

Though both Cigar plume and molds do look alike, they differ in obvious ways. Therefore, spotting them will be easy with this article firmly immersed in your mind. Furthermore, they both have different functions and indicators that allow you to differentiate them quickly. Some will say the Plume is good and the mold is bad. Please find the best interpretation and stick to it.

How to Put Out a Cigar