Davidoff is one of the most notable premium cigar brands. The brand is famous not only for its top-quality cigars but also cigar accessories. Imperial Brands were the initial owners of the brand; however, in 2006, the Davidoff brand purchased the company.

The brand was named Davidoff after the Jewish Founder Zino Davidoff, who was born in the Russian Empire. Before he bought the cigar brand, he had a tobacco specialist outlet in Geneva, Switzerland, and cigar lovers popularly called him the “King of Cigars.”

Zino Davidoff decided after the Second World War to obtain a license to produce his cigars. Considering that he had international customers, he gave his cigar line the name ” Chateau,” which he coined from the famous Bordeaux estates.

In 1967, Cubatabaco, a Cuban tobacco monopoly, approached Davidoff and convinced him to create cigars with his name. In 1968, the first batch of “Davidoff” cigars was released. Their unique formats identified the cigars, No. 1, No. 2, as well as the Ambassadrice.

From then on, the brand continued to create fast-selling cigars, which they delivered across borders. In 1980, the Zino Davidoff group branched out and began the sales and distribution of non-tobacco goods. They ventured into the marketing of items such as leather goods, watches, eyewear, fragrances, watches, coffee, etc.

The brand spun out of the cigar brand to maximize the trademark diversification and promote the sales of the tobacco products because it helped advertise the brand, even when there were restrictions on the direct promotion of products containing tobacco. 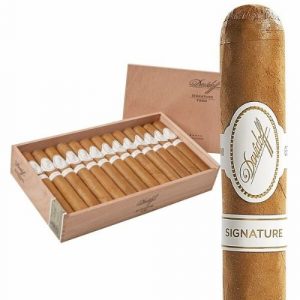 The Davidoff signature line is one of the indisputable originals when it comes to premium cigars.

The cigars in this range are elegant, with mild blends of the signature flavors that include fresh floral scents, woody and earthy notes, and a slight hint of sweetness that leaves a creamy taste after.

The signature line of Davidoff has been around for a long time, and it has proven its worth.

They go well with rich beverages like champagne and other exotic whiskeys and spirits.

They are not overpowering in their effect. They deliver just the perfect amount of intensity to keep you stuck on your stogie.

Davidoff Grand Cru is known worldwide for its sophistication. Each cigar in the line is beautifully made from carefully selected ingredients to deliver a rich and exciting medium-bodied result.

The leaves are meticulously selected, and they give a rich woody, slightly spicy, and nutty flavor that emits a sweet aroma. The Davidoff Grand Cru line is one of the most sought-after cigar likes from the brand, and it is one of the favorites for most cigar lovers.

The Davidoff Aniversario is also at the top of the charts. The cigars in this line are a beautiful blend of rich Dominican tobaccos wrapped in a refined and luxurious Ecuador Connecticut wrapper.

The Davidoff Millennium, as the name implies, is one of the Davidoff cigars that have been around for a long time. The blend consists of a combination of rich Ecuadorian wrappers that emits rich and complex full-bodied flavor. With rich notes of caramel, chocolate, and spice, the cigar is beautifully layered and sophisticated on taste.

The Davidoff Millennium cigar line also has notes of coffee, which makes it a perfect pair for rum or aged whiskey. 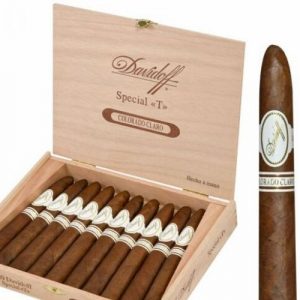 The Davidoff Colorado Claro is another exceptional and luxurious line of cigar from the stables of Davidoff.

The cigar line is one of the popular special cigar series and in it, a rare Ecuador-grown wrapper meticulously combined the wealth of flavor in the cigar.

The cigar features a savory spice that complements the nutty flavor.

The intricate blend of ingredients gives a unique balance and reveals a depth of luxury with every puff.

Davidoff cigars have come a very long way, and considering the quality that the brand maintained, it is no surprise that they are still a favorite for many cigar lovers.

The cigar brand has remained on the top of the list of the best premium cigars, even after decades, proving that only the best fillers, wrappers, and binders are extracted to create unique and distinctly flavored cigars for the brand.

What Cigars Does Sylvester Stallone Smoke?

How Far Down Should a Cigar Be Smoked?

How Long Do Cigars Last – Tips For Cigar Health 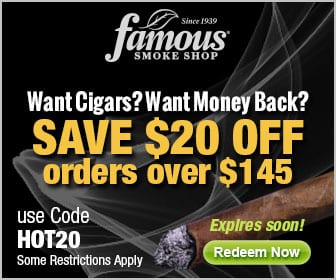